"My personal life is complex and sometimes messy."

Glenn appears to have carefully phoned the New York Daily News, to find out exactly what they had found out, before writing his own stories. In the Guardian he commented, with evident relief, “So that’s the big discovery”. 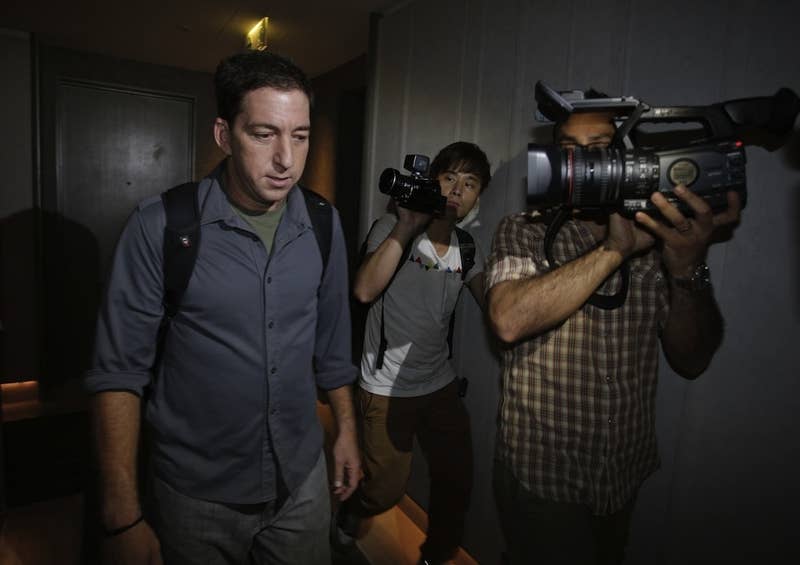 But despite his skill and ease as a litigator — or maybe because of his skill and ease — Greenwald grew bored with it. In 2002, he started a consulting company, Master Notions LLC, with his best friend, a Los Angeles film producer named Jason Buchtel. Greenwald mostly handled legal matters and contracts.

“I had no interest in business and entertainment. I was just looking around for what I was going to do next,” Greenwald said.

He assisted on the production of a movie, Showboy, a 2002 mockumentary about a fired Six Feet Under writer, and once consulted on a company’s development of “some doll that was supposed to comfort people who had anxiety issues.”

Buchtel, who did not respond to interview requests, also worked in the adult entertainment industry, identifying himself in one court affidavit as the president of “MN” (Master Notions) Entertainment:

“But if I were, I’d be proud of it,” he told BuzzFeed. “There’d be nothing wrong with it.”

After two years, Greenwald said, he was bought out of the company. He had gradually stopped taking on new cases, and his relationship with Achatz had ended. He decided to take a vacation to Brazil.
“I was going to take two months off, come to Rio, take my dog with me, and figure out what I wanted to do next in my life. I didn’t have any plan at all.”

In The Guardian on the same day, the Buzzfeed article came out, Glenn wrote:

I received an email last night from a reporter at the New York Daily News informing me that he had been “reviewing some old lawsuits” in which I was involved – “old” as in: more than a decade ago – and that “the paper wants to do a story on this for tomorrow”.
Upon calling him, I learned that he had somehow discovered two events from my past. The first was my 2002-04 participation in a multi-member LLC that had an interest in numerous businesses, including the distribution of adult videos. I was bought out of that company by my partners roughly nine years ago.

The lawsuit he referenced was one where the LLC had sued a video producer in (I believe) 2002 after the producer reneged on a profit-sharing contract. In response, that producer fabricated abusive and ugly emails he claimed were from me – they were not – in order to support his allegation that I had bullied him into entering into that contract and he should therefore be relieved from adhering to it. Once our company threatened to retain a forensic expert to prove that the emails were forgeries, the producer quickly settled the case by paying some substantial portion of what was owed, and granting the LLC the rights to use whatever it had obtained when consulting with him to start its own competing business.
…
So that’s the big discovery: a corporate interest in adult videos (something the LLC shared with almost every hotel chain), fabricated emails, and some back taxes and other debt.
I’m 46 years old and, like most people, have lived a complicated and varied adult life. I didn’t manage my life from the age of 18 onward with the intention of being a Family Values US senator. My personal life, like pretty much everyone’s, is complex and sometimes _messy _. 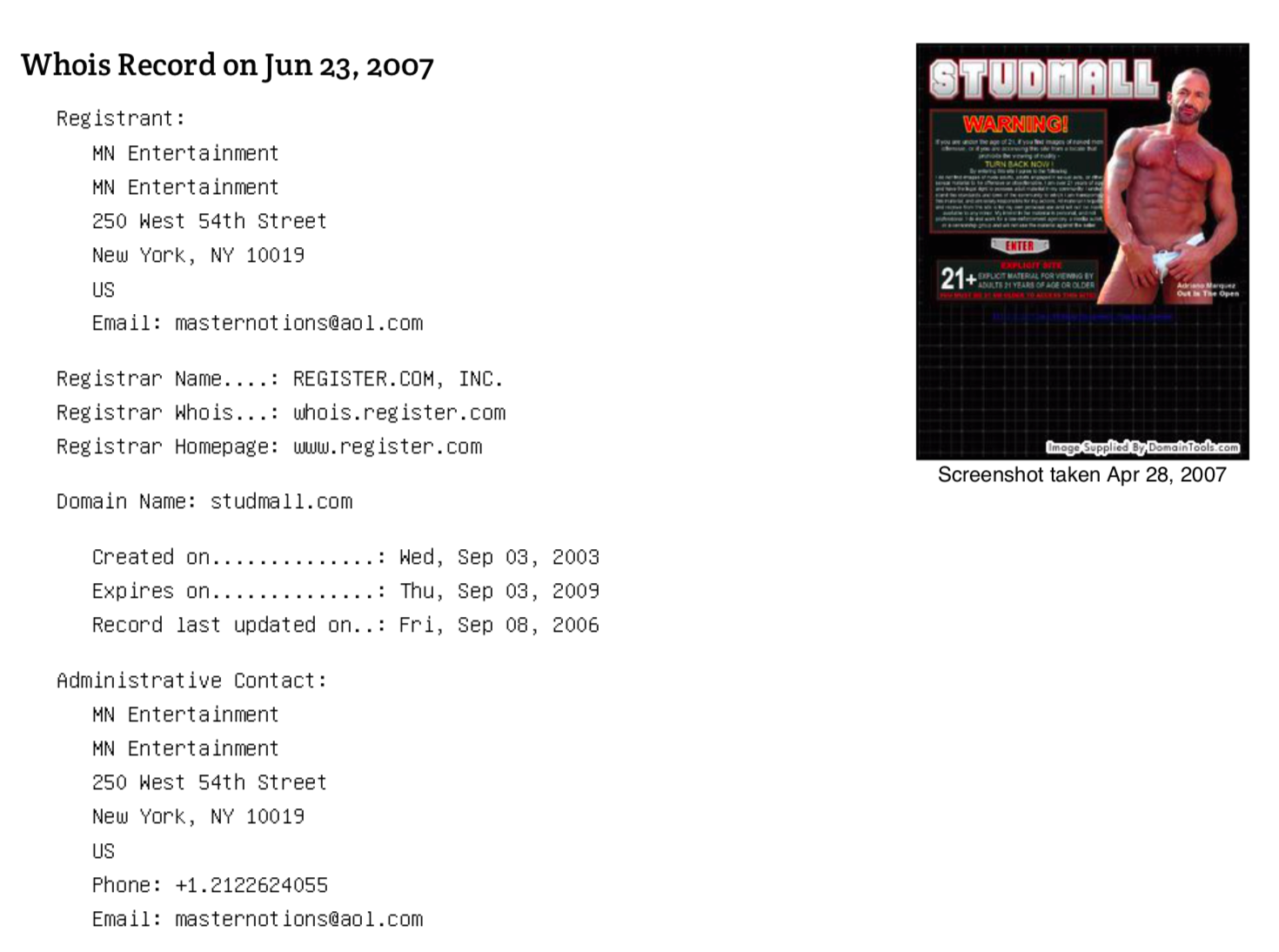 Corporate records show that Master Notions Inc. was shut down shortly after its lawsuit against the owners of Hairy Jocks Video concluded in 2004. However at least five LLCs sprung up on the same day in 2003 with names like Master Notions Video and MN Entertainment. They are still active and in Glenn’s name on the NY state records — which must be renewed every two years.
The members of these “multi-member LLCs” appear to be just Glenn Greenwald and Jason Buchtel. MN Entertainment was the owner of the Studmall.com name until January 4, 2008, after which it transferred to another company at the same address – the address which the NY Bar has for Glenn to this day.
Note that we chose a 2012 version of the site for recommended browsing as in the past year or two the current version has become strangely shy about featuring its own videos. How many centimeters is it? features Glenn’s famous voice.

In an interview in Folha de São Paulo, published in English by Worldcrunch, In Rio With Glenn Greenwald And David Miranda, they describe how they met. 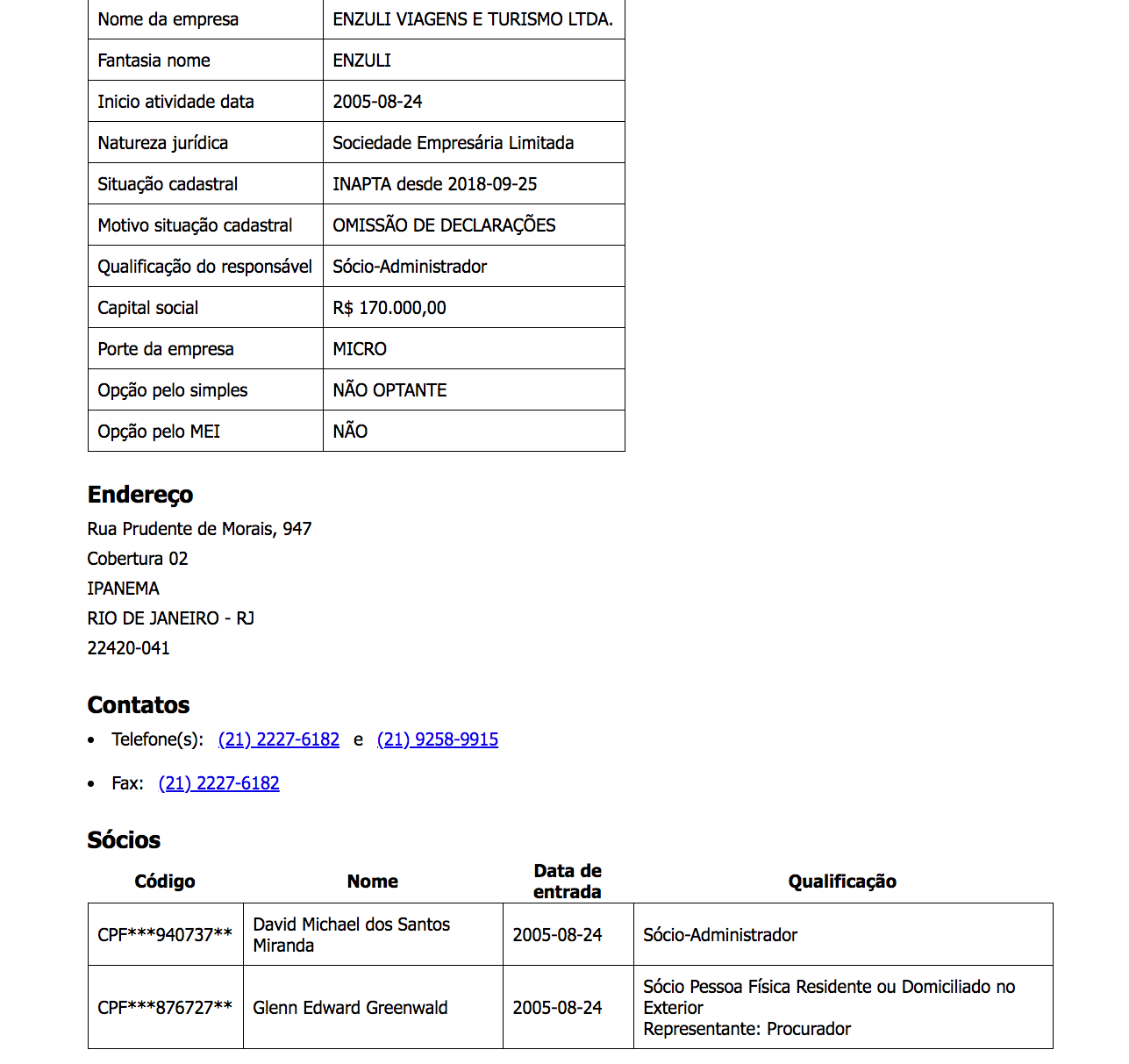 Just one week after that meeting on the beach, the two were living together. Greenwald, a New York University School of Law graduate, now 46, abandoned the law and ventured into blogging. Miranda worked on starting a tour guide company catering to gay Americans.

Yes, David. That would be Enzuli Viagens e Turismo Ltda. It operated the brands RioGayGuides.com and RioMaleEscorts.com and rented out your friends to passing Americans at very low “group package” rates.

On August 28, 2019, UOL published an article with Glenn’s comments in response to serious allegations published in Brazil.

Translated into English, it reads:

There is no record that Greenwald has participated directly in the production of pornographic films. It is a fact, however, that he was a partner, between 2002 and 2004, in the company Master Notions LLC, which “produced and distributed many entertainment products, including light sex films”, as the journalist describes to UOL. One of the distribution platforms was called StudMall and was aimed at gay audiences.

A lawyer at the time, Greenwald says he was mostly involved in legal matters for Master Notions: “The article about my involvement in pornography is a complete lie and fabrication. I have never had any involvement in the production of pornographic films. I would be happy to admit it if I had because I see nothing wrong with it,” he told the paper by email.

Don’t forget that Glenn did write under his own name in HX magazine.

“Jordan Moore”, identified here and occasioanally elsewhere as the “owner” of Studmall, seems to be a fictional name.
The owners of Studmall were Glenn Greenwald and Jason Buchtel, and appears to be a nom de plume for one or both of them.